My boyfriend and I live in Park City and we love to ski! We love the winter for the fact that we are within walking distance to one of the three resorts in town, making skiing that much easier for both of us. A few weeks ago was my boyfriend’s birthday and I had a few ideas for cakes. But every time I was thinking about it I kept coming back to the idea of a ski mountain. The runner up was a Lego cake… Yes, I live with a man that sometimes acts like he is five. I think that is why we get along so well, kids at heart. When I started this cake I knew I wanted a chair lift and some skis on there to emulate our local ski hills to keep it simple but still fun. 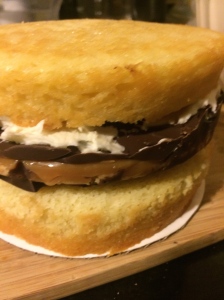 The fun twist was in the layers. One of my boyfriend’s favorite candies is Twix. Every time we are at the grocery store some how a Twix ends up in the cart. With this known fact I wanted to attempt a twix layer in the cake. I went to one of my favorite baking blogs, Food52, and found a homemade Twix Bar recipe. The  recipe I found was to make actual bars so I changed altered it just a bit to make the recipe more suitable as a cake layer. First step, make the shortbread or cookie part. Instead of making it in a cookie pan I grabbed the cake pans and made the shortbread in them. After the shortbread was done baking I took it out to let it cool. Then I melted the chocolate and spread it over the shortbread and put in the freezer to harden. While the chocolate was in the freezer I started the caramel. This time around I cheated and used store-bought caramels. I melted those down to create the caramel layer. When the caramel was melted I poured it on top of my short bread and placed it in the freezer. Finally, my last step I made the top chocolate layer. I melted more chocolate and poured it over the caramel layer. Then the it all went in the freezer one last time! 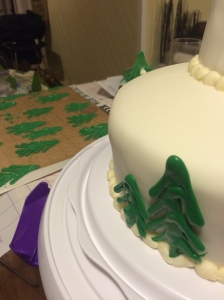 Since there was such a spectacular layer I didn’t want the actual cake to over-power that taste. Instead I went with the classic white cake, a buttermilk recipe I have used over and over again and featured on this blog. Plus I know the recipe will turn heads every time. Once the cake was made and the homemade Twix layer was ready to go the construction began. In order to get the Twix to sit nicely on the cake I put a little frosting to even out divets and bumps and to also hold it in place. I went with two tiers and once the cake was all constructed I started the decorating. I used white fondant for a snow look. And I decided to do something different with the trees, I used green melted chocolate. They had a cartoonish look which really added to the ski mountain theme. For the chair lift I made a fondant chair and towers but had to use wire to keep the chair suspended. I tried licorice as the towers but it was an epic fail. The final product came out great, and, not to mention, a total hit at the party! The Twix layer was a little difficult to cut through but tasted great. I consider that a win in my book. We have had some snow but winter isn’t in full swing yet! Hopefully the cake gods will like this cake and bless us with some snow!